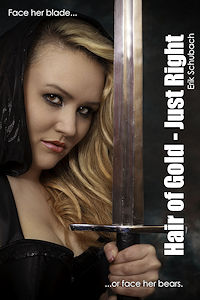 Face her blade... or face her bears!

The world has not been kind to Katiana, Goldilocks, as the werewolves robbed her of her family when she was young. She was spared a similar fate by three bears who came to her aid and fought off the wolves.

Kat finds herself in a strange new world after the loss of her family, but finds happiness again with her new familyÖ her new brothers. They raise her to be a strong, independent woman with dangerous fighting skills and the strength of any two men.

A chance meeting with a young woman and her brother finds the one thing her heart had been missing.

Infused with power she never desired, Goldilocks and her companions take on a dark witch and her druid son. The cost of victory may be more than Katiana was willing to pay.
Hair of Gold: Just Right is available at the following retailers...
eBook

Other books in the Urban Fairytales series...
©2020 Erik Schubach | About | Contact