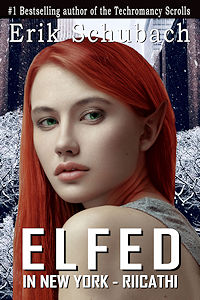 Twenty one years ago, Evander Laun and Natalia Havashire went on the air throughout the world on almost every news channel simultaneously, to reveal to the human race that Elves walked among us. It is the most-watched historical event in modern times.

Riicathi follows a new fledgling Elf, Killishia Renner, as she investigates for Channel 3 News, a series of robberies in New York City perpetrated by a band of Elves.

Her investigation coincides with the chaos caused when the International Elf Council finds she is of Riicathi blood, a clan thought long dead, and the repercussions it holds for Elvish society.
Elfed In New York: Riicathi is available at the following retailers...
eBook

Other books in the Elfed In New York series...
©2023 Erik Schubach | About | Contact