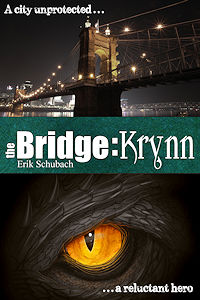 The fallout from Evangeline's rescue of Felicia in the Under-Veil and the plans of the mysterious puppet master who has been manipulating events on both sides of the veil, comes to a head.

Rumblings on both sides of Evie's gateway point to the Dragons being on the move as the Crimson Court declare all out war against the Willow Court and the mortal realm.

A last ditch effort to stop the dragons ends with Sharee unconscious as Kane tries to stop the Dragons.

No matter how things turn out, the world will never be the same.

Follow Evangeline in the series finale of The Bridge, as she trolls the Roebling Bridge in Cincinnati.
The Bridge: Krynn is available at the following retailers...
eBook