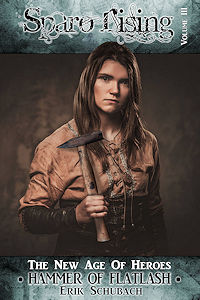 Laura and her family, the most skilled blacksmiths in Flatlash, have had a better life than some of the other commoners in the Keep. Seeing few winters where food and heat were scarce. But she dreamed of more, thinking to reach beyond her station.

By happenstance she had been part of the Sparo contingent who, while stranded in New Cali, fought to free the people there from the Thief of Minds. And along the journey she saw potential in an area of the barren wasteland of the Uninhabitable Lands.

Daring to change her stars and write her own destiny, she petitions the Crown to grant her, a mere serf, lands in which to start a mine that would raise her to the rank of nobility, and start a revolution in mining in all the lands of Sparo, taking her place in this new age of heroes.
Sparo Rising: Hammer of Flatlash is available at the following retailers...
eBook