Unleashed: Case of the Hound About Town 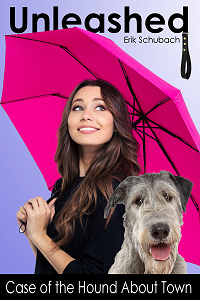 It seems that Finnegan has taken her knack for getting into misadventures international as she flies to Ireland to work on the adoption process of Luce, an eleven year old orphan who's quirks and eccentricities remind everyone of a young Fin.

Fin's wife, Detective Jane McLeary-May, and the police commander of Belfast head out in search of Finnegan and Luce when disturbances that can only be her are reported at the station while Jane is there.

A tale that will tug on your heartstrings ensues as the chase is on to save a Irish Wolfhound winds up being tied to Luce's tragic past. Fin finds herself and her border collie, Sir Calvin Cornelius Fluffytoes, Luce, and her best friend Bri on the adventure of a lifetime.
Unleashed: Case of the Hound About Town is available at the following retailers...
eBook

Other books in the Unleashed series...
©2023 Erik Schubach | About | Contact