Unleashed: Case of the Shepherd's Pie 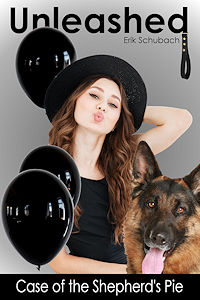 Finnegan and her personal NYPD Detective and wife, Jane, adjust to the realities of adjusting their lives to accommodate the two daughters they have adopted. One teen, Bri, and one tween, Luce.

After Brianne's graduation, Finnegan finds herself embroiled in a case involving the underworld of crime and drugs in New York City when she goes to rescue a dog in an abandoned part of a building.

Jane learns as she is racing against the clock to save her trouble magnet wife again, that Luce is more like Finnegan than they thought when she goes missing as well.

The clock is ticking as their family collectively holds their breath.
Unleashed: Case of the Shepherd's Pie is available at the following retailers...
eBook

Other books in the Unleashed series...
©2023 Erik Schubach | About | Contact