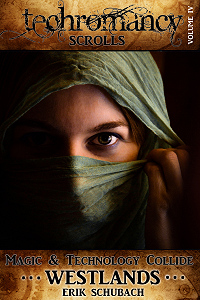 Laney and Celeste, Templars of Sparo, embark upon a mission of mercy to a far off land to aid a people thought lost to time before the Altii even found the Lower Ten.

The Westlands are found along with a new enemy that Sparo may not be able to stand against… Avalon.

Can this new threat be the Great Wizards of the Before Times? New alliances will be forged, hearts will be held and broken as Laney faces her biggest challenge yet.
Techromancy Scrolls: Westlands is available at the following retailers...
eBook

Other books in the Techromancy Scrolls series...