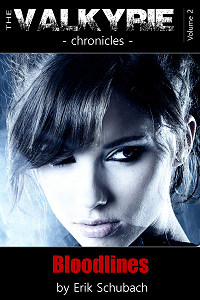 When a weakness of Valkyrie sight is uncovered, Kara, Kate and an unlikely ally, must race against time to stop a saboteur before Valhalla falls.

Arina copes with being a new type of Valkyrie and defies Odin while reminding the ruling caste what the ideals of the Asgard are and what they should all aspire to be. She must help a young Ragnarok, who was sent to die at the gates of Valhalla, to learn the truth about the Asgard and her own people.

Old enemies and lost friends weave a web that could spell the end for one of Odin's own.
Bloodlines is available at the following retailers...
eBook

Other books in the Valkyrie Chronicles series...
The story continues in the Tales From Olympus spinoff series...
©2023 Erik Schubach | About | Contact