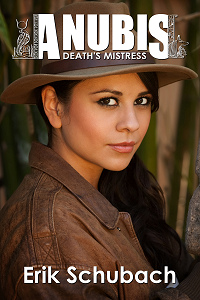 Professor Aya Bane, self proclaimed Indiana Jones of archeology (yes, she may be that much of a geek) finds herself thrown into a world of ancient gods and unexplained murders in Egypt while on a dig.

Called in for a consult to an excavation at a suspected temple of Anubis, god of the underworld, she is embroiled in a series of fantastical events. Her dreams are filled with visions of a deadly woman with a jackal's head, committing the murders attributed to a serial killer called the Pharaoh, leaving the victims as mummified husks.

With Lazarus involved, it is just a matter of time before the New Sentinels arrive to aid Aya and her newfound allies, as she tries to understand what is happening with her.

(This story is set in the same world as Djinn: Cursed)
Anubis: Death's Mistress is available at the following retailers...
eBook

Other books in the New Sentinels series...
©2023 Erik Schubach | About | Contact