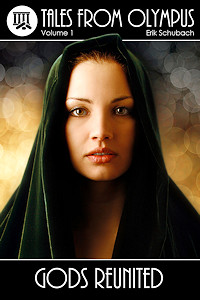 After thousands of years away from her home planet of Olympus, Artemis of the Hunt has finally returned to the Citadel.

She brings with her hundreds of Olympian men rescued from the clutches of the Titans by the legendary Valkyrie, Kara the Wild One. Along with a peace envoy of Asgard intent on coming to a peace accord and mutual defense pact with Olympus.

Olympus comes under attack, and Artemis and the Asgard must stand against the oncoming enemy.

(The Tales From Olympus are the continuation of the Valkyrie Chronicles)
Gods Reunited is available at the following retailers...
eBook

Other books in the Tales From Olympus series...
Tales from Olympus is a continuation of the Valkyrie Chronicles series...
©2023 Erik Schubach | About | Contact