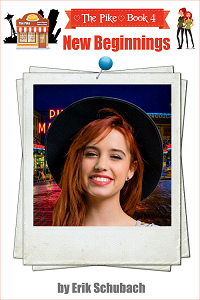 Eve, along with her sister Zoey, has an uncanny knack for helping people who frequent the Pike bakery at Pike Place Market in Seattle to find love. Her meddling is a thing of legends when it comes to matchmaking. But for Eve, it is a spectator sport as she has never really pursued a romantic relationship of her own.

Love was for other people, and she basked in the results of watching people find their happily ever afters. Imagine her surprise when serendipity came knocking and she found herself falling head over heels.

Her family has been dying of curiosity for months to find out who has Eve sneaking off to talk to in the middle of movies, or has her turning down events because she "has a date." Her secret has them all frantically trying to discover who has stolen the red headed dynamo's heart.

Eve promises everyone that her certain someone will be attending their annual family Thanksgiving celebration... but first, she has to pick up a family friend from London at the airport.

(The Pike series is set in the same world as Music of the Soul and London Harmony, and can be read as a standalone book.)
The Pike: New Beginnings is available at the following retailers...
eBook